On January end 2014, Mr. Ueda did attend on experiment sail of Wind Challenger under measuring.
The said researches is being conducted under researches support for a scheme of NK’s title
” The collaborated researches demanded by relevant industries.”

Mr. Ueda attentively pointed a question about mechanism and details about experimental inspection of
the sail and he took around inside of slewing machine room. 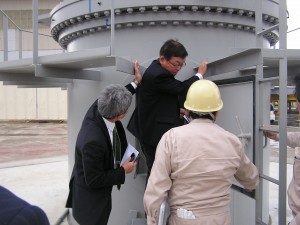 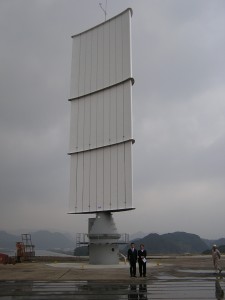 On January 25, 2014 actual hard sail observation and press conference was made at Iknow
Machinery Company Ltd.

Major attendee on above observation was as follows;

And, there were major attendee from shipping companies and relevant industries participated on the
press conference at Ainoura district, of which scenery was reported on various press company and
TV news editions.
From now on, a performance experiment using actual hard sail is expected at Iknow Machinery Co.,
Ltd. until this September.

The project of Wind Challenger is financially supported for researches of Nippon Kaiji Kyokai (NK) Class.
Please refer to following URL for details of researches.